The 25 newly appointed District Education Officers (DEO’s) have commended the government’s effort to reinforce the importance of their roles to the education sector.
In an exclusive interview with the Department of Public Information (DPI), District Education Officer, Region One, Marti De Souza said, “This training was a most valuable experience”. 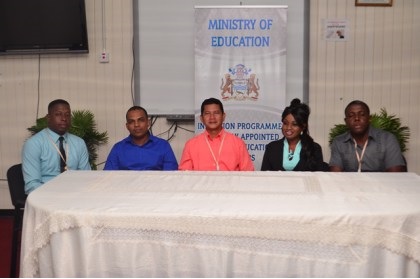 DEO, Region Four Sherwin Blackman explained that, “The workshop definitely brought some new ideas to mind”. “It asks for us to do quite a lot more and further I was pleased with the kind of support promised, by many of the parties’ present”, Blackman added.
Also from Region Four, La Shanna Anderson, said that she was “moved” by Minister of Education (ag) Nicolette Henry ’s presentation to the participants of the workshop on Monday. “I was able to do some introspection as it regards to my own practice as an officer, so I was empowered to give my best”, she said
“We were able to think outside the box. Look at different approaches to education, and it was quite fruitful”, DEO of Region 5 Sheldon Granville pointed out.
Today marked the end of a two-day workshop which began Monday morning at the National Centre for Educational Resource Development (NCERD), Kingston. The workshop was held under the theme “Education Officers- Creating and Sustaining a Culture of Excellence”.
This is the first time in Guyana’s history that 25 officers have been appointed.
Source:http://gina.gov.gy/
NCERD National Centre for Educational Resource Development DEO District Education Officers