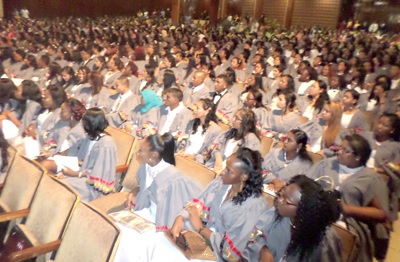 Moves are apace for the establishment of a Teachers’ Upgrading Programme [TUP] Centre in the North Pakaraimas in Region Eight. The TUP is intended to prepare in-service teachers from riverain and hinterland areas to access the Trained Teacher’s Certificate [TTC] programme.

Moreover, the Cyril Potter College of Education [CPCE] has the establishment of at least one TUP Centre in Region Eight high on its agenda, CPCE Principal, Ms. Viola Rowe, said, recently.
According to her, CPCE is also gearing towards designing and implementing an effective system of monitoring and evaluation which would include, as a strategy, the use of the staff appraisal instrument in all satellite centres.
Currently there are centres at Mabaruma, Moruca and Port Kaituma in Region One; Charity and Anna Regina in Region Two; Vreed-en-Hoop in Region Three; Turkeyen and Georgetown in Region Four; Moraikobai in Region Five; New Amsterdam and Rose Hall in Region Six; Bartica and Kamarang in Region Seven; Mahdia in Region Eight; Lethem, Aishalton and Annai in Region Nine and Linden and Kwakwani in Region Ten.

The monitoring and evaluation approach, Rowe said, is developmental. It would allow for gaps, limitations and strengths to be identified across centres. She said, too, that results would also inform the type and nature of, for example, development activities necessary at the level of individual, centre and the institution.
“Ultimately, without losing sight of contextual differences, the proposed strategy would help to ensure congruence in the quality of the delivery across centres,” Rowe said.
Rowe underscored that CPCE has continued to demonstrate that “we are not oblivious to the quality [that is] imperative in our business of initial teacher preparation.”
CPCE, she said, has continued to operate on the principles which characterise quality education as it relates to: being concerned with the cognitive development of learners, and nurturing of softer skills, attitudes and values in learners as recommended by the United Nations Educational, Scientific and Cultural Organisation [UNESCO].
As part of its effort to focus on the development and nurturing of soft skills of teacher trainees, the CPCE a few years ago introduced a Pastoral Care Initiative [PCI]. The PCI, according to Principal Viola Rowe, was one aimed at stimulating the affective side of learning.
This tactic, she explained, was designed to equip and reinforce in students, skills and values including problem-solving, volunteerism, basic courtesy, cohabitation, conflict resolution, anger management, deportment and respect for self, others and the environment.
But the PCI has since been reviewed and is now being dubbed the Pastoral Care Programme [PCP] with the inclusion of failsafe environment concept. In such an environment, Rowe said, students are willing to take risks in learning new measures such as new skills and or adjusting values knowing that behavioural change may take time but are confident to continue in a supportive environment.
“This environment comprises three distinct dimensions: failsafe mentorship, friendliness in feedback, and knowing self and others,” according to Rowe.
PCP, she said, commenced in the period 2015-2016 with the resident students as the target group. However, during the reporting period [2016-2017], it was extended to non-resident students at the Turkeyen Centre. It is the expectation of Rowe that the programme will eventually be included in all CPCE centres.
“Indeed, the impact of the PCP would be realised over time,” said Rowe. “If you were to visit our Turkeyen campus and interact with our students, you would be pleased with the high level of courtesy, warmth, love and respect by all.”
According to Rowe, CPCE has been slowly, progressively and deliberately nurturing those softer skills which are needed in the school system. To this end, she noted that CPCE will remain encouraged by the favourable feedback from students and other stakeholders who believe that PCP indeed holds many possibilities for the greater good.