- Diagnostic Centre to be opened for new school year

Eight persons graduated today from a three-month training programme which equipped them with the requisite skills to work at the Centre to Stimulate the Development of Children, Adolescents and Youth with Special Education Needs Associated with Disabilities in the compound of the Cyril Potter College of Education (CPCE).

The eight individuals are the first batch of trainees to have been trained in this regard. They are: Mr. Keenan Benjamin, Ms. Mycinth Robertson, Mr. Calvin Lawirie, Ms. Yolanda Williams, Ms. June Herod, Ms. Kalina Phillips, Ms. Michelle Nicholas and Ms. Kelly Coonjah.
Delivering the feature address at today’s graduation ceremony at the National Centre for Education Resource Development (NCERD), was Minister of Education, Hon. Nicolette Henry. She said the event today would not have been possible without the collective commitment of the Cuban Ambassadors to Guyana, initially His Excellency, Julio Marchante and now His Excellency, Narciso R. A. Socorro, along with the Government of Guyana’s Minister of Foreign Affairs, Carl Greenidge and CARICOM Secretary-General, Ambassador Irwin LaRocque.
She said that the initiative is an exemplary illustration of stakeholders working together for the common good of Guyana’s educational mandate, “Quality Education for All”.
Further, Minister Henry noted that it is encouraging to know that the Centre for Stimulation facilitates training for the management of persons with disabilities for not only teachers and social workers, but additionally training in the support and guidance of parents and family member of special needs individuals as well. 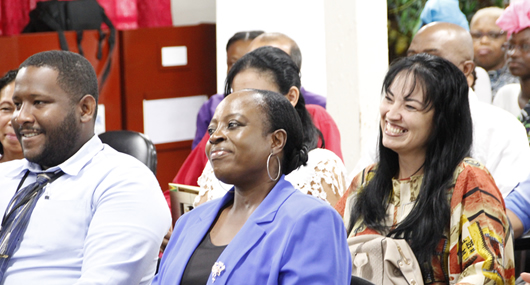 “The services of the centre will serve all of Guyana and also extend to the rest of the Caribbean as it is the central hub for the CARICOM region,” Minister Henry said.
According to the Education Minister, the Centre for Stimulation comes at an opportune time since it dovetails perfectly with the Education Strategic Plan for the Special Education Needs Unit.
She said that the SEN Unit’s 2014-2018 plan has six broad areas and among them is the creation of a National Database for students with Special Education Needs.
Minister Henry said, “In other words, once a student would have been referred to, the Centre subsequent to a minimum of three interventions the student would then have an official classification and would have an officially drafted Individualized Education Plan (IEP). It is with this data, that the number of students with IEP would inform the Ministry of Education with formal numbers of students with Special Educational Needs, therefore, required training for teachers and needed support services can be put into action.”
Minister Henry noted that the Centre to Stimulate the Development of Children, Adolescents and Youth with Special Education Needs Associated with Disabilities will be opened for the new school year beginning September 2018.
Further, Minister Henry stated that the eight graduates are now equipped with the skills to create individuals that can achieve their full potential for Guyana. “With your work, your students are given the opportunity to reach higher against all of the odds to shine as individuals without barriers, to be an inspiration to all of us.”
Cuban Ambassador to Guyana, Mr. Narciso Socorro, expressed his happiness that through collaboration, a beautiful and important project became a reality. He said that the idea for the centre was birthed at the Fifth CARICOM-Cuba Summit in Cuba in December 2014.
He said that the agreement for the Centre was signed between CARICOM, the Ministry of Foreign Affairs of Guyana and the Ministry of Education of Cuba in December 2015.
According to Permanent Secretary within the Ministry of Education, Mr. Vibert Welch, the training of the eight officers will ensure that all children, whether gifted or challenged, are given opportunities to develop their intellect.
Meanwhile, Permanent Secretary within the Ministry of Public Health, Ms. Colette Adams congratulated the officers and advised them to absorb all that they can to positively influence the lives of all children they will encounter.
Moreover, Project Coordinator, Mr. Jorge Ramirez said that the opportunity exists for the children with special needs to reach their full potential. He told the graduands that the work they will embark on is vital and has the potential of changing the lives of special needs children as well as families and communities.
During the ceremony, those gathered were treated by musical renditions performed by the Bishops' High School Steel Pan Orchestra, a dance by students of the David Rose Special School and the Unit for the Blind and Visually Impaired.