The event was aimed at unleashing the creative potential of Guyana’s youth in the use of Science, Technology, Engineering and Mathematics (STEM) for the developments of their communities and the country in this global digitized era.
Despite the inclement weather, scores of persons, predominantly young people, flocked the venue where close to 20 booths from various STEM clubs from across Guyana hosted display.
These included participants from the Deaf Association, Buxton/Melanie STEM club, Belladrum Stem Club, Starr Computers, Metro, Crabwood Creek, Bartica and Linden. 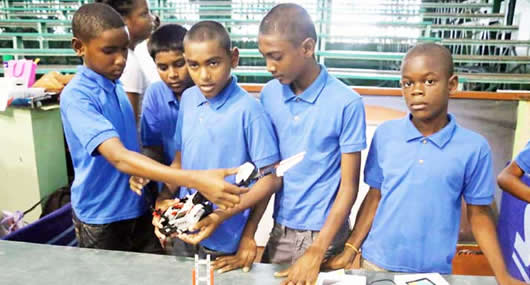 Starr Computers had several drones and holograms on display. Various types of robot exhibitions under the themes of Education, Healthcare, Oil and Gas, Agriculture and Irrigation were presented.
Other features of the exhibition included Lego brick play stations for children under 10 years old and the app development booth, where persons were provided with instructions on how to create a simple android app.
The highlight of the exhibition, the Team Guyana Robotics competition field, was on display and team members demonstrated how the robot is expected to operate at the First Global Robotic Challenge to be held next month in Mexico.
Co-founder of STEM Guyana, Karen Abrams, who was present at the event was elated at the turnout. She admitted that this year’s event attracted more STEM teams and spectators compared to the inaugural event which was held last year.
According to her, the event attracted lots of support from communities with some participants coming all the way from Bartica, Crabwood Creek and Linden.
“It has been awesome,” Abrams exclaimed, adding that, organizers believe that the event is gaining momentum and that persons have come to recognize its benefits. Abrams also disclosed that organizers have already began preparations for next year’s exhibition which is expected to attract over 100 teams.
“This year’s was definitely better than last year. We have gotten more people, more teams, there is more energy,” she said. Abrams went on to explain that the event is not only aimed at teaching persons about robotic, but also to enhance their communication, problem solving and critical thinking skills.
According to the STEMGuyana co-founder, these are some of the qualities a person needs to possess to be a good and productive citizen and to help solve problems in their community, country and worldwide.
All in all, organizers have indicated that the goal of the exhibition is to inspire, motivate and educate Guyanese youth and to encourage them to consider other career options in the field of technology, math, engineering and science.
Last year’s exhibition was held on June 24, and saw over 20 booths on display from Kuru Kururu, Lusignan, President’s College, St Rose’s, the Bishops’, the Ministry of Education, NT Computec, Gizmos and Gadgets, and many more.
At that event, First Lady Sandra Granger spoke of the importance of robotics to everyday life. Robots and drones are being used in the areas of drainage and irrigation, agriculture and medicine, she added.
A month later, a team from Guyana participated in the inaugural Robot Olympics which was held in Washington D.C, USA. Overcoming many challenges along the way, the Guyana team finished 10th in the fight against 164 other countries.
STEMGuyana introduces technology programmes for youths; programmes that will excite them, while encouraging their creativity, innovation and problem-solving skills.