Government sees education as necessary for the attainment of the “good life,” that it wants for all Guyanese. Government’s primary challenge however, remains the crafting of a system that produces the kind of education necessary to achieve this goal.

During the debates of the 2016 budget in January, Education Minister Dr. Rupert Roopnaraine had said that, “The stark reality is that our education system, under the previous administration, failed to grapple with that concern, with focus instead being placed on achievers of certificates at the expense of the education of the citizens.”

Dr Roopnaraine had explained that these among other challenges will be confronted in the year 2016 as the Ministry seeks to overcome the challenges and launch new initiatives for the enhancement of the education system. He promised that, enhancement “would eventually impact the ultimate goal of the system: the production of a better all-round citizen and the creation of a better society.”

Eleven months later, during the 2017 budget debates, the Education Minister outlined the following as the achievements made in 2016 towards the enhancement of the education system.

A breakfast programme that benefitted 657 pupils was successfully piloted in nine East Coast of Demerara schools, between the communities of Buxton and Enmore.
The expansion of the hot meal programme in 50 other nursery and primary schools in Regions 1, 7, 8, 9 and the Pomeroon River benefitted 4,000 more students.
In 2016, a total of over 70,000 pupils received some form of nutritional snack or meal through the national school-feeding programme

Over 133,000 students benefitted from the issuing of school uniform vouchers, and the distribution of footwear and bicycles, particularly in the hinterland and riverine communities.
In an effort to cushion the cost of transportation for students, as well as, reduce the rate of dropouts at the post-secondary level, a monthly stipend was given to over 500 students of the Leonora and Mahaicony Technical and Vocational Centres and the Upper Corentyne Industrial Training Centre.

In keeping with the thrust of balancing the expressive arts with academic excellence, an additional 52 primary teachers were trained in the delivery of the music programme

The Ministry has recognised there is a need to address the increased rate of psycho-social issues in schools. To this end, initial efforts were made to construct counselling rooms in 10 secondary schools namely: Cummings Lodge, Richard Ishmael, St. Mary’s, Lodge, South Ruimveldt, Tutorial, Dolphin, East Ruimveldt, Tucville and Charlestown to provide a space for remedial psycho-social sessions with students.

Recognising the invaluable role parents play as partners in education, the Ministry launched the READ PLAY LOVE mass media campaign which – through print, video, radio, and web-based interface – will inundate communities across Guyana with the core message that primary caregivers and the community at large have a critical role to play in the education and socio-emotional development of young children.

Recognising that curriculum is the cornerstone of any education system, in 2016, the Ministry took some steps towards conceptualising the revision of its curriculum, including stakeholder consultations, curriculum review and assessment, curriculum development, training for curriculum pilot programmes and implementation and development of national assessment for the curriculum. 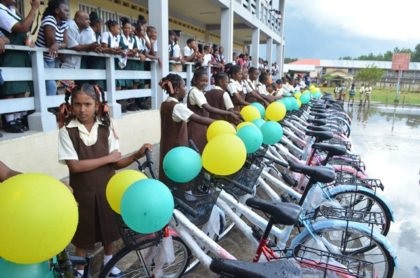 The Ministry has a mandate of ensuring that all secondary schools are adequately equipped for the teaching of ICT-related subjects. In addition to its ongoing work in providing a growing number of schools with new or upgraded computer lab facilities, 2016 also saw the launch of the One Laptop Per Teacher initiative. 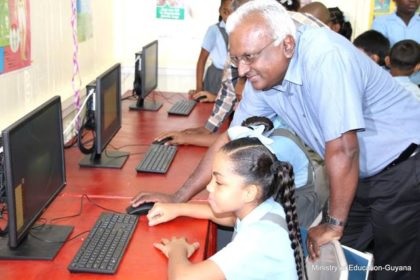 In collaboration with the E-Government Unit, 82 secondary schools, eight Technical Vocational Education Training (TVET) institutions and six Departments of Education were provided with Internet and network connectivity, while 33 additional secondary schools and seven Cyril Potter College of Education (CPCE) sites are in the process of being connected.
Under the Secondary Improvement Project, grade 7 students from eight pilot secondary schools; North Ruimveldt, Diamond, Bladen Hall Multilateral, Annandale, West Demerara, Leonora, St. Ignatius and Bartica were recipients of 1,120 tablets, all fully loaded with mathematics software with the aim of enhancing learning through the use of technology. The teachers have been trained to utilise this new methodology and the schools have been equipped with projectors and servers to facilitate this process. Further, three science laboratories were completed at Vryman’s Erven, Canje and Annai Secondary schools

Consistent with the drive to embrace the fundamentals of a green economy, the Ministry of Education partnered with the Guyana Energy Agency (GEA) in an attempt to reduce the usage and cost of electricity. GEA conducted energy assessments at 29 secondary and has conducted energy saving awareness exercises at three city schools. GEA has also provided support to the Ministry of Education through the rehabilitation of photovoltaic systems at five hinterland schools. GEA has also installed solar photovoltaic systems at seven schools, all in an attempt to ultimately conserve the use of energy and electricity costs.

Under the University of Guyana Science and Technology Support (UGSTSP), 15 Bachelor’s Degree programmes in the faculties of Natural Sciences, Technology, Agriculture and Forestry and Earth and Environmental Sciences were reformed and introduced in the 2016/2017 academic year.
In addition, 13 buildings were rehabilitated and laboratory equipment and furniture were installed in the science and technology faculties and a fiber optic ring and wireless network were installed.
Research projects in the areas of the impact of mining on biodiversity, alternative medicine and the integration of environmental education in the mathematics curriculum were completed.
Research in other areas such as the carbon storage potential of the mangrove forests in Guyana; the effects of corilla on secondary and primary cancer cell lines; and the impact of mining on fish diversity and diet in coastal and inland rivers of Guyana, continued.