-emphasis placed on diversity in Guysuco to save industry

The Guyana Sugar Corporation (GUYSUCO) together with the Board of Industrial Training on Friday hosted its graduation ceremony for the fifth batch in the National Training Project for Youth Empowerment. 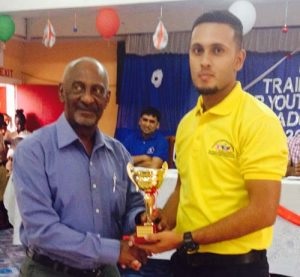 The graduation exercise saw several persons attached to various organizations, private and public, excelling in different skills areas.
Present at the ceremony was the Minister within the Ministry of Social Protection, Keith Scott, who in his brief address to the graduates and attendees charged that “the fact that you have been able to stay the course from last year to now tells me that you have what it takes to be a success.” He emphasized that Guyana is taking off at a fast pace in development and as such it gives persons the opportunity to utilize skills garnered for further development.
Scott stressed that for too long the country was tied to sugar, rice and gold. “We are seeing on the horizon a brighter future; your skills will not only be demanded in Guyana but Suriname and throughout the West Indies.”
It is his view that with the shortage of entry level skills, the graduates will now be able to fit in to all sectors, private and public.

Also addressing the gathering was the Manager of Rose Hall Estate who placed much emphasis on diversity within the industry.
He noted, “In order for the corporation to grow and become profitable once again it has to diversify, it is clear that sugar on its own will not survive, sugar as it is presently will not survive; therefore we have to make changes.”
Clinton Williams, Chairman of the Board of Industrial Training, said that with Guyana’s development programme it will continue to be widely influenced by the availability and competency of its technical occupational skilled workforce.
He stressed that with the gap between work place needs and work place capabilities the mismatch continues to be largely influenced by the stigma attached to Technical and Vocational Education and Training, “TVET is viewed as the last resort for academically weak students hence the prevalence of low standards by skills generated.”

According to Williams there is a “dire national skills deficiency syndrome” since the demand for TVET skills are increasing with new sectors emerging such as Oil and Gas, Hydropower Development, Spin-off Industries from Guyana’s LCD’s initiative such as Eco Tourism and Clean Energy.
He underscored that the goal of the project is to “contribute to the national demand for occupational skills by the training and development of youths particularly disadvantaged youths to become self-employed or to access gainful employment.”
One of the students from the batch, Keeon Playter, an insurance agent who received the award for Best Performance in Electrical Installation 1, and also scored a distinction told this publication that having gained the skills in such a field is a plus for him. “It is definitely a bonus to me in terms of qualifications. It will help me in the future to get a job I always wanted in the electrical field. It is also a very good initiative introduced by the last administration and it is wonderful to see that the present administration has continued with such a programme”.
The programme which commenced last April ran until November. There were six courses— Electrical Installation 1, Basic Fitting and Machining, Welding and Fabrication, Motor Vehicle Servicing and Repairs, Refrigeration and Supervisory Management.
Seventy five persons gained distinctions in their respective courses; 18 secured passes and 25 graduated with credits.