Tamara Hutson has two boys enrolled at the Green Acres School Group and for the first time, she finally received the promised ‘Because We Care’ $19,000 cash grant as the distribution commenced there on Wednesday.

“I am grateful because the government never thought about us private school, I have never received any cash grant before, it is my first time and I am very grateful,” she told the News Room moments after uplifting the cash at the school’s Thomas Street, Georgetown location. 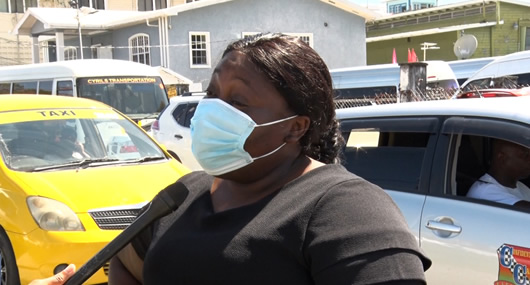 The mother of two said that she will use the money to purchase books for her sons and place the extra in their bank accounts.

Bernadette Adonis braved the sun to uplift the cash grant for her grandson, who also attends the Green Acres School Group.

“I have mixed feelings about it but I have happy that his mother will have something extra to help with the school expenses,” she said.

Tamara Hutson and Bernadette Adonis are among the thousands of parents across Guyana who will benefit from the government’s ‘Because We Care’ initiative that was only offered to those in the public school system.

On September 19, President Irfaan Ali granted approval for the programme to be extended to those in the private school system.

The cash grant programme enjoys widespread popularity but was discontinued by the APNU+AFC while they were in office.

It has since been reinstated by the PPP/C upon their return to office and the amount of the grants increased to a total of $19,000 per student.