Niall Gravesande, a father of one said the Government’s extension of the ‘Because We Care’ cash grant initiative is much welcomed.

Speaking to the DPI on Wednesday, he said the grant has come at a time when many persons are struggling financially as a result of the pandemic.

“This is a good initative that comes at a time when Guyana is going through the pandemic and you know the ups and downs with finances…. when I first heard it was being extended to private schools, I was a bit excited because you know, persons are of the perception that once your children are going to private schools, that you’re well off. That’s not true. Some of us, we hold our nose to spoil our face just to make our kids comfortable.”

Many others like Mr. Gravesande shared similar sentiments and commended the government for the extension of the cash grant and School Uniform and Supplies grant to students in private schools.

Gavin Ramnarine whose daughter attends the Mae’s Primary School said ,“it’s a great move from the government to extend the cash grant to those of us who have children in private schools. It’s not everybody in private schools can say they can afford it. They struggle to get their kids through school and this little bit makes a great difference to all of us.”

Similarly, Naudia Maraj said “it’s a really good initiative. I think a lot of parents would appreciate the extra support.” 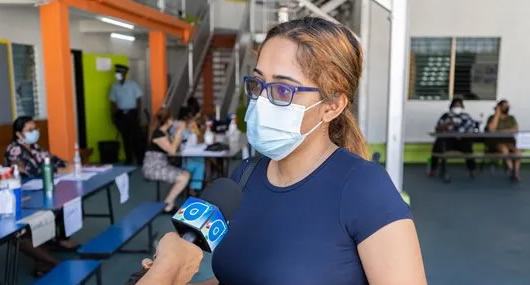 In an invited comment, Education Minister, Priya Manickchand, MP, said the extension of the grant to private school students is a response to calls made by parents. She noted that traditionally, the government does not make public investments in the private school system except in broad areas such as the curriculum and tax breaks.

“The parents this year made it very clear to us as a government that they wanted to see their children benefit from this programme. Also they felt very strongly that they were equally entitled, given that they are paying taxes, and that they too have expenses, and particularly in this year with Covid, everybody has had extra expenses, and being a responsive government President Ali said, we’re considering it, we thought about it for a little bit of course we had to get some budgetary injection into the ministry and that’s what we’re doing today we are rolling out the because we care cash grants to private schools, which is really the government’s response to parents. You’re answering the call of parents here.”

Some 17,000 students will benefit from the $320 million programme. Already, the cash grant has been distributed to private school students in Regions Two, Three, Six and Ten.

The programme, is the brainchild of the PPP/C Government. It has seen widespread popularity over the years, until it was discontinued by the APNU/AFC during its tenure in office. It has since been restarted by the new PPP/C Government with major increase to the grant. The ‘Because We Care’ grant is now valued at $15,000 and the school uniform and supplies grant at $4,000, amounting to $19,000 per student.

Some $3.3 billion has already been distributed to parents of more than 175,000 students. The grant is expected to increase to $50,000 over the next five years.