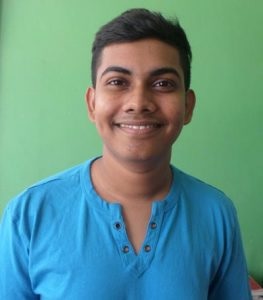 Having secured 25 grade ones and one grade two passes at the 2017 Caribbean Secondary Education Certificate [CSEC] examination, 16-year-old Michael Bhopaul will no doubt go down in the annals of history as an outstanding academic performer. His feat is one that has never before been accomplished and could possibly see him being named the country’s top national performer when the Ministry of Education announces the results today.

Bhopaul’s outstanding performance, which entailed 21 distinctions, may even see him being recognised as the top regional performer later this year by the Caribbean Examinations Council [CXC]. But that’s left to be seen.
During an interview with this publication, Bhopaul disclosed that he is not overjoyed by his performance, but rather, satisfied that his hard work and dedication have paid off. He is, however, concerned with the grade two pass he got for English B, and is therefore planning on having it reviewed.
“I was disappointed because I know what I did on that literature paper…but I am also pleased with the 25 ones.” 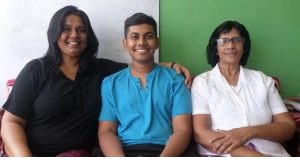 Among the subjects that Bhopaul secured grade one passes in are: Mathematics, Additional Mathematics, English A, Physics, Chemistry, Biology, Human and Social Biology, Integrated Science, Principles of Accounts, Principles of Business, Office Administration, Economics, Electronic Document Preparation and Management, Information Technology, Social Studies, Caribbean History, Geography, Technical Drawing, Industrial Technology, Spanish, French, Food and Nutrition, Home Economic Management and Agricultural Science Double Award
[which counts as two subjects].
When asked why he opted to pursue 25 subjects, a smiling Bhopaul calmly quipped, “I did it for the fun of it.”
In fact, he disclosed that his preparation for CSEC was not even rigorous. According to him, he hadn’t the need to intensify his studies, as he merely continued a trend that he had long grown accustomed to. A regular day in the life of Bhopaul entailed him leaving home around 06:30 hours to attend Mr. Robert Carryl’s Additional Mathematics classes in D’Urban Backlands. A year earlier he was attending Mrs Ingrid Fung’s English classes from 07:00 hours.
After the early morning lessons, Bhopaul recalled heading over to QC in time for the start of school. He recalled that his teachers at QC were especially helpful, since timings of many of his subjects clashed. He also attended other lessons after school, some of which lasted until around 19:00 hours.
“Michael was on the go from Monday to Sunday,” said his proud mother, Ms. Roopdai Bridganand. But she had every confidence that her son’s dedication would pay off.

According to her, Michael would stay focused on his school work for hours and would give each subject keen attention. She recalled, for instance, how his dedication would even see him busy with Food and Nutrition projects in the middle of the night.
“Sometimes he would jump out of bed and say mom ‘I’m going and bake’ and I would say ‘boy, now is midnight’,” a smiling Bridganand recalled.
His father, Mahendra Bhopaul, now a retired Deputy Head Teacher of Christ Church Secondary, was also very supportive over the years. He described his son’s performance as “phenomenal” and noted that it was quite “daring” for him to even pursue such a feat. But he too insisted, “I had total confidence in him and I hope he continues to make the right decisions.”
Like his parents, Bhopaul’s cousin, Tracy Ramoutar, was not at all surprised by his performance. As she too reflected on his performance over the years, she concluded that it has remained consistent although he was, at times, faced with some undesirable circumstances.
“He wasn’t a privileged child, he didn’t have driver; he was disturbed by loud music many days…there was even a murder in the area,” highlighted Ramoutar, as she considered that the public school system did not fail her young relative.
In 2012 when the results of the National Grade Six Assessment were released it was Bhopaul, then a pupil of the Graham’s Hall Primary, who, with 547 marks, tied with Ramesh Ghir of Mae’s Under 12, to secure the title of top national performer.
“We followed him for the consecutive years leading up to this [CSEC] and he was very consistent, topping his classes at QC. He studied 14 hours per day, every day, including Sundays and holidays, so we know his potential…so the news of him doing well wasn’t really surprising,” Ramoutar related.
She recalled that even from a very young age she knew that there was something special about Bhopaul.
“We talked about a whole lot of things from international affairs to the development of our country. We had lots of arguments too…every topic I raised with Michael, he was able to give me an answer,” Ramoutar recounted.
According to Bhopaul, being engaged in such conversations was in fact a form of relaxation for him. He also engaged in other activities outside of his studies such as poetry recital, debating, Craft Club and even drama fest, for which he wrote a play and acted in for his school a few years ago.

But Bhopaul is concerned that students in the near future may not be in a position to accomplish a similar feat as his or even better. This is in light of a memo that was issued earlier this year by the Ministry of Education outlining a limit to the number of subjects students will be able to write at CSEC.
Essentially the Ministry is aiming to limit students of senior secondary schools to 10 subjects and those of junior secondary schools to six. However, an assertive Bhopaul shared his belief that “there isn’t anything more painful than unfulfilled potential…it is an important part of self-realisation to understand your capabilities.”
Moreover, Bhopaul is of the conviction that the Ministry should instead seek to assess the abilities of students before determining the number of subjects they are allowed.
“They could perhaps even do it [assessments] by school and decide on a general range, in terms of the number of subjects. Once you have the ability, you should be allowed to write the number of subjects that will be suitable for you,” Bhopaul underscored.
The next move for this ambitious youth is to write about eight or nine Caribbean Advanced Proficiency Examination (CAPE) subjects.
He aspires to one day become a Professor of Quantum Physics. This is in light of his view that “quantum physics is a very interesting field when you try to describe the particulate nature of matter in terms of wave phenomena.”
But Bhopaul is concerned that even when he concludes the requisite studies for his envisaged career, local facilities will still be lacking. However, he is not prepared to let the prevailing circumstances deter him from his goals.
In fact, his advice to his peers is that “You shouldn’t let your success be defined by others and you shouldn’t measure yourself with others, because everyone has his or her own capabilities.”
In addition to having the correct mindset, Bhopaul noted that persons also have to believe in themselves in order to be successful.
“Know your goals and be ready to pursue them and perform to the best of your abilities,” he firmly asserted.