They have done their schools, and by extension country, proud by consistently yielding outstanding performances over the years,

the latest being at the 2017 Caribbean Advanced Proficiency Examination [CAPE].However, both Vamanadev Hiralall and Shawn Shewram, who are among the top performers at CAPE this year, are hoping that their performances will not only be mere features in the daily newspapers but rather would be good enough to help them land scholarships.

The People’s Progressive Party/Civic Government in 2012 announced that the two top performers of CSEC and CAPE would be eligible for scholarships to attend universities of their choice. The former Government had however reneged on its commitment to grant scholarships to the candidates’ chosen universities.
But Minister of State Joseph Harmon said that because of its emphasis on young people, the A Partnership for National Unity (APNU)and Alliance for Change (AFC) Government has committed to continuing the granting of scholarships to the top performers to universities of their choosing up to the end of 2015.
He’d however divulged that “Thereafter Cabinet has mandated the Minister of Education to examine the programme carefully and to come up with firm recommendations.”
Harmon had disclosed that Cabinet had given guidance to Minister of Education that in looking at the condition for the award of scholarships that “the Minister and the Ministry consider scholarships for people in Guyana at UG.” This, he had related, would translate to the expansion of the scholarship programme where it is no longer limited to the top performing students pursuing studies aboard but also to include “deserving students in Guyana who can pursue degrees at UG.”
At the time the Minister of Education was Dr. Rupert Roopnaraine, a portfolio that is now being filled by Ms Nicolette Henry.
Henry in an invited comment to this publication on the scholarship issue said “whatever people are due they will get. There is no plan to disadvantage anyone, so once they are due they will get it.”

VAMANADEV HIRALALL
When Hiralall, a student of the Saraswati Vidya Niketan [SVN] wrote the Caribbean Secondary Education Certificate [CSEC] Examination in 2015 he was among the top performers. He achieved 19 grade ones and one grade two. In his quest to advance his studies he wrote the Caribbean Advanced Proficiency Examination [CAPE]. When the results were released Tuesday he was understandably among the top performers. 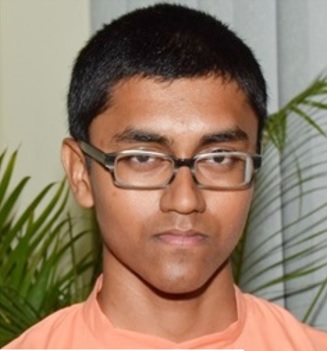 Hiralall wrote eight subjects and gained grade one passes in all eight units. The subjects he wrote included: Caribbean Studies [Unit 1], Biology [Unit 2], Chemistry [Unit 2], Computer Science [Unit 2], Environmental Science [Unit 2], Information Technology [Unit 2], Pure Mathematics [Unit 2] and Physics [Unit 2]. The previous year he secured grade one passes in Biology [Unit 1], Computer Science [Unit 1], Environmental Science [Unit 1], Physics [Unit 1] and Pure Mathematics [Unit 1] and grade two passes in Chemistry [Unit 1], Communication Studies [Unit 1] and Information Technology [Unit 1].
Hiralall told Kaieteur News that he knew that there was a possibility that he would have done well.
“I really pushed myself to do my best and I am happy with my performance.” According to the 18-year-old, he was able to benefit from a great deal of support from God, his parents, his teachers at SVN and the blessings of the believers of International Society for Krishna Consciousness [ISKCON] movement.
The top performer who has plans to one day delve into the medical field, disclosed that he is currently exchanging information with the University of West Indies. In fact he revealed that submitting his CAPE grades will in fact represent the final stage of his exchange with UWI. Once accepted at UWI, Hiralall said that he intends to complete the Bachelor of Medicine, Bachelor of Surgery [MBBS] programme. But according to the young man he is hopeful that he will be able to claim the Presidential Scholarship to pursue his dreams in the field of medicine.

SHAWN SHEWRAM
Much like Hiralall, Shewram was long making a name for himself academically. The St. Rose’s High School student also shared the top performing spotlight in 2015 when the CSEC results were released. He gained 14 grade ones and 2 grade two passes then. According to Shewram, he worked really hard and therefore expected that he would do well.

“I feel relieved and contented with my performance because I know I would have put in a lot of work to achieve it; everybody around me knows that I worked hard for this…so to see everything unfold like this, it is something to be relieved about,” he added.
The 18-year-old also achieved eight ones at CAPE for Caribbean Studies [Unit 1], Economics [1 Unit], Economics [Unit 2], Entrepreneurship [Unit 1], Entrepreneurship [Unit 2], Accounting [unit 2], Law [Unit 2] and Management of Business [Unit 2].
Shewram is hopeful that he too will be able to take advantage of the Presidential scholarship to study law overseas. However, this young man said that if this is not possible he will settle for the law programme at the University of Guyana.

ASHLEY ANTHONY
“Very satisfied, happy, excited,” are some of the adjectives 18-year-old Ashley Anthony used to describe how she feels about her performance. Anthony recalled ensuring that she focused a great deal of studies on her areas of weakness but didn’t have need for a rigid study schedule. 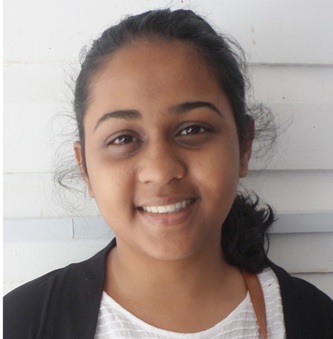 “It was very flexible,” said Anthony who expressed appreciation for the support she got from her sister, Jessica Anthony [a past top performer] and her parents, doctors Shanti Singh and Frank Anthony. According to Anthony, “the unit of Biology I did had a lot of health and so they [parents] helped with that.”
Anthony was able to achieve seven grade one passes at CAPE. Her success was recorded in the subject areas of Communication Studies [Unit 1], Integrated Mathematics [Unit 1], Applied Mathematics [Unit 2], Biology [Unit 2], Chemistry [Unit 2], Pure Mathematics [Unit 2] and Physics [Unit 2].
The Queen’s College Student who was also a top performer at CSEC with her 17 grade ones passes in 2015, hopes to pursue studies in the field of Bio Physics.
With her laudable grades in hand, she hopes to apply to a University in the United States.

SHANNON WOODROFFE
Shannon Woodroffe has every intention of becoming a mechanical engineer. She envisions perhaps even being able to find a job in Science Technology Engineering and Mathematics [STEM]. As such, she said that she is definitely proud of her performance at CAPE.

Woodroffe secured seven grade one passes in Communication Studies [Unit 1], Integrated Mathematics [Unit 1], Applied Mathematics [Unit 2], Biology [Unit 2], Chemistry [Unit 2], Pure Mathematics [Unit 2] and Physics [Unit 2].
“I am relieved to have realised what I wanted to achieve…it was a fairly difficult road, after all good things don’t come easy. There was a lot of hard work and preparation put into what I was able to achieve,” said Woodroffe. The Queen’s College student, like the other top performers, was also outstanding at CSEC where she achieved 14 grade ones in 2015.
According to the 18-year-old who has already applied to the UWI to undertake a degree in Mechanical Engineering, she is prepared to dedicate herself to realising even more successes in the future.