Imagine having to walk for one hour to get to school in the scorching sun every morning at the age of 10, then another hour in the afternoon after school has ended. This was the plight of 15 pupils of the Nappi Primary School in Region Nine before receiving kind donations through efforts spearheaded by Minister within the Ministry of Communities, Valerie Patterson.

About a month ago, Petro Nilla, the Headteacher of Nappi Primary School made a request to the minister during a visit to Nappi, for the bicycles, which she said was desperately needed for the pupils.
“We made a request about a month ago when Minister Patterson visited for bicycles for children who were travelling to school, walking five or more Kilometres,” she said.
And during a second visit to the community, which the minister has unofficially adopted, 15 bicycles were donated to the pupils and their elated spirits could not be controlled.
The bicycles, which vary in sizes and colour, were donated by United Commodities Inc, Aruwai white H2O, Food For the Poor and a private individual, James Herbert.
Shadia Henrico, 11, who will be sitting the National Grade Six Assessment (NGSA), next year, said she felt proud owning a bicycle.
“I feel so proud of having this bicycle. We used to spend about one hour walking to school every day, two times a day and it was very hard on us,” the Nappi Primary School pupil said. 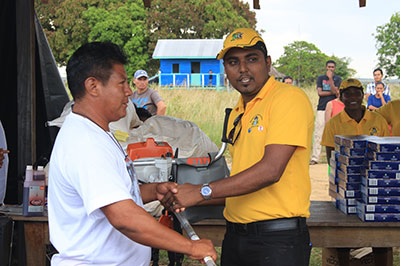 Her Headteacher was also happy and surprised at the fact that the donation was made in such a short time. She also acknowledged the efforts of every individual who chipped in to help support the pupils.
“We are extremely thankful to everyone who helped to provide these bicycles. It will be of great help to the students, especially at this time when students have national exams.”
She went on to explain the impact the bicycles will have on the lives of these children.
“When children have to walk great distances, it affects how they perform at school, because by the time they get to school, they are tired or hungry and they cannot focus during school hours,” she said.
Cognisant of this, Minister Patterson encouraged the children to utilise their new bicycles for the purposes intended and to treat them with care so they would be able to benefit from them as long as possible.
She also encouraged them to remain focused on their education, which she said is the key to a successful life.
But the donations made by the minister were more than just bicycles. The village also benefitted from a brush cutter, while food items and cosmetics were distributed to residents.
That same day Nappi was observing its Village Day. The occasion is usually observed during Amerindian Heritage Month every year. It was a fun-filled day as residents were able to socialise with friends and family, participate in sporting activities, and of course, enjoy Indigenous delicacies.
Minister Patterson was accompanied by Minister Dawn Hastings-Williams and the two participated in the activities with the residents of Nappi.
Indigenous Heritage Month this year is being celebrated under the theme: “Our Culture, Earth’s Future – Save the Environment, Live the Indigenous Way.”