Teachers of the Waterloo Nursery School, Region Five and the Auchlyne Primary School, Corentyne, Berbice, Region Six were urged to encourage children to love school by creating a comfortable and conducive environment.

Mrs Sita Nagamootoo, wife of Prime Minister Moses Nagamootoo advised, “you still have people out there who care about you, and who are supportive of what you are doing.”

During a visit to the schools, Mrs. Nagamootoo, said that, “our children must be happy to come to school, do their work and love their teachers.”

The visit to Regions Five and Six is the second in a series of visits to schools engaging the first year nursery pupils and providing them with books, crayons, pencils and rulers. Teaching aids have also been provided to the schools.

“Someone asked me what motivated me to do these visits. I just want to say that I have been doing this for the past 40 years, it has been my job, it has been my profession, it has been my business. I have always enjoyed working with children,” Mrs. Nagamootoo told the pupils and teachers at the Waterloo Nursery.

The visit to school coincides with Education Month 2016 which is currently being observed, and Mrs. Nagamootoo believes that the timing is appropriate. “I thought it would be a good thing to come out and meet with the teachers and move around with the children.” 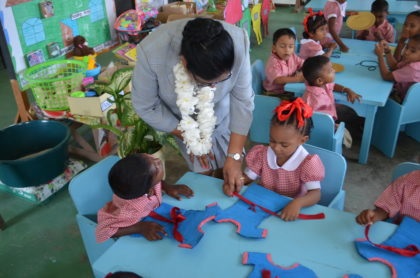 During her visit and tour of the Auchlyne Primary School where she addressed hundreds of students, Mrs. Nagamootoo underscored the importance of education and asked the students to make full use of the opportunity provided for them to earn an education.

The Auchlyne Primary School is the former educational institution of President David Granger, Prime Minister Moses Nagamootoo and Mrs. Nagamootoo. It is the first time in the history of Guyana that one primary school has produced the sitting leaders of Government. For Mrs. Nagamootoo returning to her alma-mater was a joyous occasion. 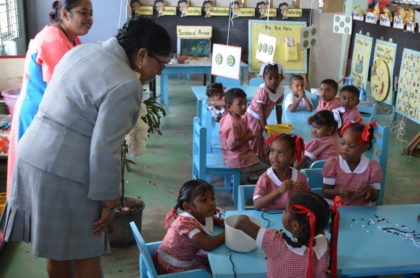 On social media, Prime Minister Nagamootoo supports the work of his wife and stated that, her goodness outreach, with help from the family and the Ralph Joseph Charity to those children in early childhood, is encouraging.

In the past few days, Mrs. Nagamootoo has been doing her rounds to observe Literacy Day and Education Month, and has brought joy to children, now starting early childhood education in diverse places such as Shieldstown, Albouystown, Bel Air Village, Bath and Auchlyne.
Earlier, her ‘Do Good’ mission took her to far off villages such as Hiawa in South Rupununi, Annai, Fairfield and Surama, and to Canals Polder and other West Demerara communities. With funds from her Charity, named after a family friend, Ralph Joseph, formerly from Whim Village, Mrs. Nagamootoo has been moving around with small goodies including cricket gear, story books and markers.
“I am just trying to do good,” she explained as she encouraged all parents and professionals who can afford, to do so as well.

“Mrs. Sita Nagamootoo, an educationist and former headmistress/lecturer, has joined what appears to be a DO GOOD team whose work has been spearheaded by President David Granger and includes First Lady Mrs. Sandra Granger and Social Cohesion Minister, Hon. Amna Ally,” the Prime Minister stated.

It is the first time in the history of Guyana that a Head of State distributed for the benefit of children, buses, boats, bicycles, boots, books (5Bs).

Teachers of the Waterloo Nursery School