The Board of Industrial Training (BIT) of the Ministry of Social Protection has for the first time; ventured into Region Eight (Potaro-Siparuni). The Board started its operation in 2005. 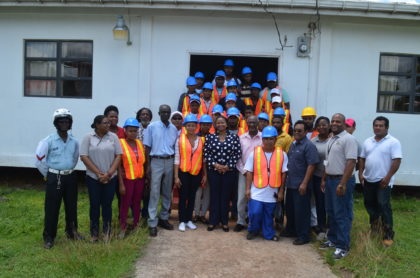 Working in collaboration with the Region Eight, Regional Democratic Council, BIT is currently providing its Heavy Duty Equipment Operator (HDEO) Programme to 27 males and four females in the region.

While training started on August 22, it was only yesterday that a ceremony to introduce the programme was held in the boardroom of the RDC in Mahdia.

Addressing the gathering that including the 31 students, Minister Lawrence and Minister Scott both noted that the training was in keeping with President David Granger’s vision for an educated and skilled youth population.

Minister Lawrence noted that it was in keeping with the President’s declaration to reduce the disparity in the regions, as it relates to access to services including youth training.

“What the President has said and what we are doing here today tells me, that even if I am in my rocking chair, I will be certain, that if we continue in this trend, that whatever will be experienced on the coastland that our fellow Guyanese will be experiencing in the hinterland,” the minister said.

Meanwhile, Minister Scott noted that the undertaking was in keeping with the President’s commitment to put youth empowerment on the front burner. “Today you are the youths who can testify that you have been given a chance,” Scott told the participants.

He noted that through the training programme, the administration will be equipping the 31 youths with a marketable skills which is in demand, and which they can use to develop their region and by extension Guyana.

Also urging the youths to be beacons of Mahdia and the region’s development were the Regional Chairman and AREO.

Arjoon and Fredericks who both briefly addressed the launch, lauded the Ministry for providing the training in the region. They both noted that it would improve the lives and livelihood of the residents of the region.

The regional officials also noted the relevance of the programme saying it comes at a time when Mahdia needs such skills if it is to successfully attain its township status.

Arjoon explained that the training was much needed, given the abuse and misuse of state equipment and machinery by operators in the region who do not have full knowledge of how to operate and maintain the equipment.

According to the CEO Maria Khelawan, BIT chose to take the heavy duty programme to the region following consultations with the regional administration on the relevant skills needed for the region’s development.

Khelawan also committed to further BIT undertakings in the region, particularly in the provision of training in forestry, which she noted is relevant to other parts of the region.

Since its introduction in 2005, BIT has expanded significantly from the provision of two training programmes in Georgetown and Linden to now offering nine courses.

In addition, BIT is now available in almost every region, except for Regions One and Nine. Khelawan said that plans are in place to bring these regions on stream in 2017.