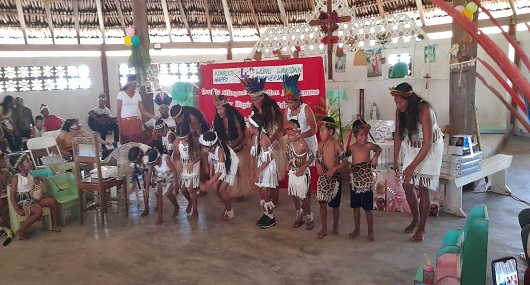 Scenes from the celebration to mark the programme’s fourth anniversary

The bilingual programme is the result of collaboration among the Wapichan communities, teachers, the Ministry of Education and the Jesuits of Guyana. The programme formally came into effect in 2018 with the signing of the first Memorandum of Understanding with the Ministry of Education, which saw the programme being piloted in three Nursery Schools: Sawariwau Nursery, Karaudarnau Nursery and Maruranau Nursery. The QBEP intends to improve the quality of education delivery in the three Nursery schools using the mother tongue language in lesson delivery in the classroom.

A core team of resource persons from the South Rupununi communities prepared learning materials in the Wapichan language which was used to teach the children in the three Nursery schools. The programme was active in the schools until the closure due to the Covid-19 pandemic in March 2020. During the prolonged closure, the QBEP team continued to work with parents, preparing materials and sharing same with the parents to use with their children in the homes.

On October 6, 2022, a new Memorandum of Understanding was signed which will see the programme run for another year, one in which an independent evaluation will be done. The plan is for an extension to fourteen additional Nursery schools in the South Rupununi District.