- Noise and sewage complaints being addressed

The Honourable Minister of Education, Priya Manickchand visited the construction site for the new building which will house the St. Rose’s High School to assess how the work is progressing and to address issues affecting the school.

Minister Manickchand was accompanied by the Permanent Secretary of the Ministry of Education, Mr. Alfred King, Special Projects Officer, Mr. Ron Eastman and Technical Officer to the Permanent Secretary, Mr. Cosmo Browne. The team from the Ministry of Education met with representatives of the company that was awarded the contract to construct the school, Shandong Degian International and representatives from the consultancy firm on the project Kalitech Inc. Engineering Design and Supervisory Consultants. 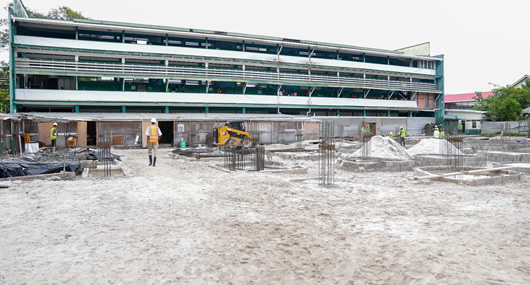 Among the updates provided by the contractor is that the construction of the school is currently 10% complete at a time when it should have been 8% complete according to an established schedule. This was confirmed by Mr. Eastman.
Minister Manickchand said that the Ministry will be monitoring the project closely to ensure it is completed according to the contractual timeline so that students can benefit from the new edifice. 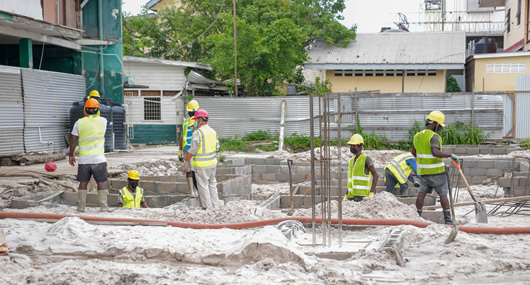 Students are presently being taught in classrooms located in a section of the old building which hadn’t to be demolished due to its structural soundness.
However, due to the nearby construction, there has been a complaint regarding noise emanating from the construction site. This was addressed today between the contracting firm and the Ministry whereby Minister Manickchand asked that a system be put in place to reduce the inconvenience that will come from the work being done. 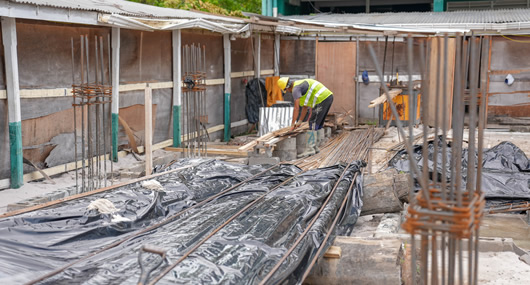 Another complaint was the backup of sewage in the compound of the school. This is currently being addressed by the Guyana Water Incorporated (GWI). Following her visit to the construction site, Minister Manickchand and team met with GWI staff working at the Camp and Quamina Street Sewage Station. According to Sewer Maintenance Officer, Mr. Akedo Softley the sewage blockage is created when residents allow prohibited items to enter the sewer line.
He said this causes the system to be clogged resulting in a backup in the community like what is being experienced at St. Rose’s. He said once the blockage is cleared, the situation at the school will automatically be fixed.

He explained that to prevent this from happening in the future, residents need to stop allowing prohibited items such as paper towels, sanitary napkins, dental floss, condoms, newspapers and any other time that is not toilet paper or human waste from getting into the sewer system.
Minister Manickchand thanked Mr. Softley and his team for the work they are doing and the important service they are giving to the country. Within a few days, the sewage issue is expected to be fully addressed.