– 270 pupils to be accommodated in modern facility

The Government of Guyana and the Ministry of Education is on the move to ensure access to education at all levels across Guyana. Today, the sod was turned signifying the beginning of construction of the Martyrs’ Ville Nursery School on the East Coast of Demerara.

The Honourable Minister of Education Priya Manickchand in her remarks told residents that the school is a priority for the Government and that is evidenced by the construction of the school being catered for in the first budget passed by her Government since assuming office in August 2020.

She said that despite nursery education is not compulsory in Guyana, the statistics show that Guyanese parents take that level of education very seriously, hence efforts have to be made to ensure that children have access to nursery schools across Guyana.

She said that prior to the COVID-19 pandemic when all schools were open for face to face teaching, children from Martyrs’ Village at the nursery age had to attend the Mon Repos Nursery school which is approximately one mile from their community.

She said that presently 42 children from Martyr’s Ville attend the Mon Repos Nursery school and providing that schools can be reopened while they are still at the nursery age, they will be able to attend a school closer to home.

Minister Manickchand noted that the aim is not to just provide a classroom for pupils to sit but for them to receive a quality education. 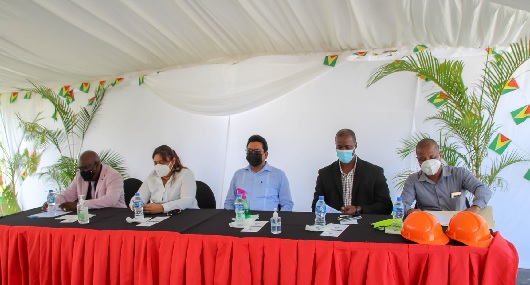 Minister Manickchand added that though Guyana has already achieved Universal Primary Education, it is yet to achieve Universal Nursery and Secondary Education. She said that such projects will ensure the country moves closer to realising that goal. Only last Friday the Ministry of Education turned the sod for the construction of the Prospect Secondary School on the East Coast of Demerara.

While addressing the audience of parents, pupils and residents of the community, Minister Manickchand sounded a warning to the firm that was awarded the contract to build the school, Doodnauth Construction and Supplies. She made it vehemently clear that there will be zero tolerance for slothfulness regarding the project and that the Ministry and the residents of the community are looking forward to the completion of the school by August 31, 2021 which marks the end of the contractual timeline.

Minister of Legal Affairs and Attorney General, Honourable Mohabir Anil Nandlall said that it is an honour for him to be associated with the project since he grew up in the community. He said that the community has transformed over the years and that further development is in the pipeline.

He said that the school will cater to the families that will soon move into the community and would need a nursery school for their young children to attend. He said that education is one of the government’s highest priorities. “Our children are our most precious assets. Not the oil, not the gold, not the diamond, but our children and that is why if you look at all our budgets, education ranks as one of the largest allocations,” the Attorney General remarked.

He said that it is hoped that the facility will be built on time particularly in light of Government’s strong position on contractors not honouring agreements.

Chief Education Officer, Dr. Marcel Hutson said that the school will be built with a focus on the development of the ‘total child’ by addressing issues such as access, safety, health and the enhancement of teaching and learning processes.

He said that the Ministry is cognizant that nursery education is the foundation and pace setter of all other education levels that follow. According to the CEO, Guyanese can look forward to the rolling out of similar projects across Guyana as the Ministry’s Strategic Plan is executed to improve the efficiency of the education system.

Meanwhile, Project Coordinator and Head of the Ministry’s Buildings Unit, Mr. Ron Eastman gave an overview of the project and noted that the total cost is $89 million and will accommodate 270 students. 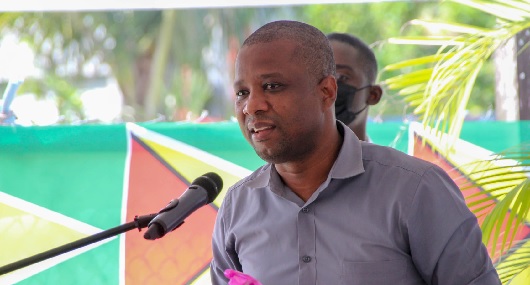 He said that the facility will have in excess of eight classrooms and contain a modern sanity block, an independent water system and space for outdoor recreation.

Chairman of the Neighbourhood Democratic Council Mr. Ayube Mohamed said that this project has been long in the making and expressed his gratitude on behalf of the Martyrs’ Ville community to the Government of Guyana and the Ministry of Education for making the school possible.