Although it was Fatima Karim of St. Rose’s High School who achieved 19 grade ones and one grade two passes at this year’s Caribbean Secondary Education Certificate (CSEC) examination, it was in fact her counterpart from Queen’s College’s, Kayshav Tewari, who was officially named the country’s Most Outstanding Overall CSEC Performer.

Tewari was also awarded for being the Best Science Performer at the examination.
The announcement was made yesterday by Superintendent of Examinations, Ms. Sauda Kadir-Grant, when the Ministry of Education held its 20th National Award Ceremony for outstanding performance at the National Cultural Centre.
Tewari, who secured 19 grade one passes, was duly awarded for being the Most Outstanding national 2016 CSEC candidate. He was also awarded, along with Karim, for being the top performers at this year’s CSEC examination allowing them to become eligible for Presidential scholarships to further their studies.
Tewari secured grade one passes in Agriculture Science (DA), Biology, Chemistry, Economics, English A, English B, Geography, Information Technology, Integrated Science, Mathematics, Physics, Principles of Business, Principles of Accounts, Religious Education, Social Studies, Spanish, EDPM, Human and Social Biology and Additional Mathematics. 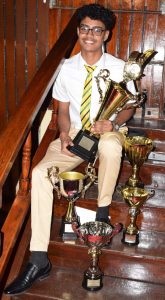 The two (Tewari and Karim) were also awarded yesterday along with Aadilah Ali and Sariah Singh, both of Queen’s College, for being the best senior secondary school performers.
Also receiving an award for being an outstanding CSEC performer was Esther Hercules of The Bishops’ High School. Hercules was recognised for being the Best Creative and Expressive Arts performer at the 2016 CSEC examination.
According to Exam Superintendent Kadir, the Examination Division makes arrangement for the administration of all national examinations which comes under the purview of the Ministry of Education. The Division, moreover, is the custodian for all examinations results.
“Consequently we are given the task of identifying the awardees in each category,” Kadir explained as she added, “we are given set criteria to guide us in identifying the eligible candidates.”
But since the examinations fall into two categories – local and regional – the process of selection differs. According to Kadir, for each of the local examinations the top performers at the respective examinations are eligible for the award.
However, for the regional examinations top performers are identified by the set criteria. As such Kadir disclosed that the guidance of the examining boards, such as the Caribbean Examinations Council (CXC), is normally sought in identifying the top performers.
Yesterday’s awards were also presented to the best CSEC performers of junior secondary schools.
Among the awardees were Ramkumarie Ramdass (18 ones, 1 two) and Kimberly

Najab (15 ones, 3 twos) both of the Saraswatie Vidya Niketan, Joshua Indarjit (17 ones) of the Skeldon Line Path Secondary and Kevall Lall (15 ones) of the Anna Regina Secondary School.
But it wasn’t only the CSEC performers who claimed the spotlight. Yesterday, even in her absence, Larissa Wiltshire of Queen’s College was named and duly rewarded for being the Most Outstanding Performer Overall at the 2016 Caribbean Advance Proficiency Examination (CAPE). She was also awarded for being the best 2015-2016 national CAPE candidate.
Wiltshire, who has commenced studies overseas, along with former schoolmate, Sarah Hack, produced performances that made them eligible for presidential scholarships. Her parents Justice Roxanne George and Garfield Wiltshire proudly received trophies intended to reward their daughter for her performance.
Other outstanding CAPE performers who were rewarded yesterday were Deenauth Mohabeer, Ashley Anthony, Joash Gobin and Shannon Woodroffe all of Queen’s College. Also rewarded was Carissa Kissoon of The Bishops’ High School.

Yesterday’s award ceremony also saw the best National Grade Six Assessment (NGSA) candidates being awarded. They were Anthony Ferreira of Mae’s Under 12 (568 marks), Aryan Singh of Dharmic Rama Krishna (568 marks), Sarena Razak of Graham’s Hall Primary (565 marks) and Chelsea Barnes of Success Elementary (563 marks).
Top performers of tertiary institutions including the Carnegie School of Home Economics and the country’s technical institutes were recipients of awards too.
The Carnegie top performers were Ayodele Bovell (Garment Construction), Moneyep Thornhill (Commercial Food Preparation), Gizelle Lopes (Catering and Hospitality), Suzanne Saunders (General Cosmetology) and Abigail Henry (Interior Decoration).
Romeo Matthews, Richard Kansinally and Rachelle Webster were rewarded for being the best performers of the Government Technical Institute, while it was Tomeka Bobb and Mahadeo Vickram who were so recognised at the Linden Technical Institute. Trisanna Edwards was the lone candidate of the New Amsterdam Technical Institute who was awarded yesterday.
The Best Graduating Student of the Cyril Potter College of Education, Hirannie Persaud, of the Anna Regina Centre (ADE Primary programme) was also on hand to receive a trophy yesterday.
The Education Ministry also continued its tradition to reward the best performing hinterland student with the Desrey Fox Scholarship award. This year the recipient is Lennox Hernandez.
Awards were also given to the most improved schools with awards going to the Providence Primary, Bush Lot Secondary (junior secondary) and McKenzie High (senior secondary).
The award ceremony yesterday was held under the recently celebrated education month theme: “Each child matters: stakeholders unite for the enhancement of education.”
While the forum saw speeches from the likes of Acting President, Mr. Moses Nagamootoo, and Minister of Education, Dr. Rupert Roopnaraine, it was also laced with several entertaining performances.
Performances were delivered by the Guyana Police Force Band, the Region #Four School’s Choir (choral rendition), the National Dance Company (dance), the West Demerara Secondary School (steelpan rendition) and a spoken word rendition by Keon Heywood, Mark Luke-Edwards and Nirmala Narine.