“Charles is King” one man blurted in the background as captains Malcolm Hendricks and Chinwendu Rover posed proudly with the championship trophies, signaling Charlestown Secondary’s dominance in the ExxonMobil Under-14 School Football tournament.

The riveting finals in the Boys and Girls category transformed the Ministry of Education ground on Carifesta Avenue into a festive atmosphere on Saturday as school football, coordinated by the Petra Organisation, returned in all its magnificence.

No doubt the Charlestown Secondary School will be reveling with similar scenes on Monday morning when the ‘kings’ and ‘queens’ pass through the gates as reigning champions.

In the Boys final, which concluded under lights, Charlestown had to dig deep to eke out a 3-2 victory via penalty kicks after a 1-1 draw at the end of regulation and extra time against Ann’s Grove Secondary, while in the Girls final, the city institution prevailed 2-1 over East Ruimveldt Secondary.

It is the first time in the tournament’s history that a school made a clean sweep of the titles.

Captains Malcolm Hendricks and Chinwendu Rover with the championship trophies

Skipper Hendricks put Charlestown in the lead in the 15th minute with a powerful right-footer from outside the box, but East Coast side Ann’s Grove equalized through Selwyn Fraser five minutes later, the stroke of halftime.

With the contest in the balance, both sides fought courageously to seize the lead in the second half, but to no avail. Chances were created though, but finishing was the issue.

Extra time also failed to separate the sides in the Georgetown-East Coast showdown, and it was penalties that decided the outcome, sparking wild celebrations by the Charlestown supporters.

The victory secured the Charlestown boys $300,000, which will go towards a project at the school, while Ann’s Grove received half that amount. 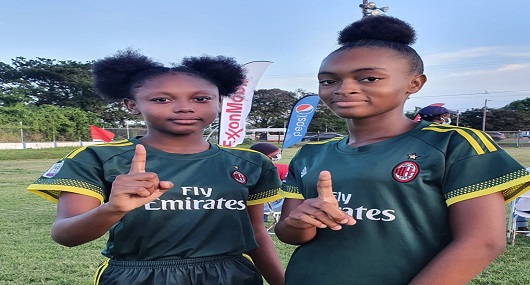 Earlier, it was the Charlestown girls who were basking in the glory of success as the lasses of East Ruimveldt Secondary were left to rue a missed opportunity.

Charlestown’s victory was set up by first-half strikes from Hadassah Smith and tournament MVP Chelsyi Lupe, and it seemed the contest would end 2-0, before Azari Wilson, who scored two hat-tricks in the competition, pulled one back for East Ruimveldt Secondary moments before the final whistle.

The cash incentives were the same for the champions and runners-up for the females. 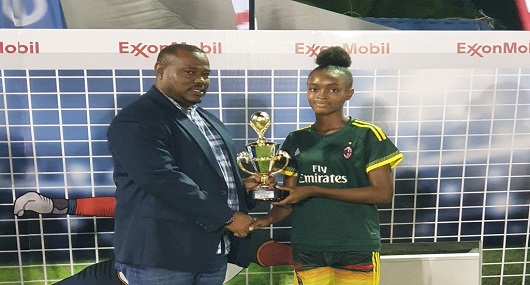 MVP of the Girls category Chelsyi Lupe receives her trophy from Co-Director of the Petra Organisation, Troy Mendonca

At the presentation ceremony, Co-Director of the Petra Organisation, Troy Mendonca, commended ExxonMobil and Demerara Distillers Limited, through Pepsi, for providing a platform for the young men and women to showcasing their worth.

He lauded all the schools- 24 in the Boys category and eight in the Girls- for their efforts over the duration of the competition, while congratulating Charlestown Secondary on the historic double.

Ryan Hoppie, ExxonMobil Guyana’s Community Relations Advisor, expressed the company’s delight to partner with the Petra Organisation, and President of the Guyana Football Federation, Wayne Forde, while lauding Charlestown pupils on their success, reminded the student/athletes that they are all winners.

Next up on the Petra Organisation calendar is the third GuyOil/Tradewind Tankers Under-18 Schools Football League, set to kick off on September 18 and run until November 6.

Ministry of Education Government of Guyana