THE Ministry of Education on Tuesday began the distribution of the education cash grant across the country as parents of school-aged children turned up at schools to uplift their vouchers in the sum of $30,000.

This initiative will result in the direct injection of $6 billion into the local economy, according to the Ministry of Finance.

Education Minister Priya Manickchand officially launched the programme at the Belle West Primary School in Region Three (Essequibo Islands-West Demerara), where she reported that a lot of work was put into ensuring that the exercise was conducted smoothly.

Minister of Amerindian Affairs Pauline Sukhai as she handed over the first cash grant to a parent in Region Eight. (DPI photo)

She used the opportunity to underscore that the only criteria for parents to receive the grant was for their child’s name to be on the register.
“This grant is for every child who is on the register, and who has been attending school,” Minister Manickchand said.

The “Because We Care” cash grant and uniform voucher are part of welfare measures being implemented by the government to put more disposable income into the pockets of parents, and increase school attendance of learners, particularly those who are at a disadvantage because their parents could not always afford the basic necessities.

The government, in its Manifesto, had promised that by 2025, each school-age child will receive $50,000.
The “Because We Care” project was started in 2014 under the People’s Progressive Party/Civic (PPP/C) Government, and saw parents receiving cash grants of $10,000 per child in the public school system.
However, when the A Partnership for National Unity + Alliance for Change (APNU+AFC) assumed office in 2015, they discontinued the initiative, which was not only restored when the PPP/C returned to office in 2020, but was significantly increased. 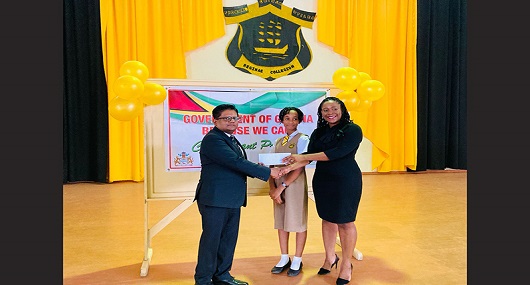 Senior Minister within the Office of the President with Responsibility for Finance Dr. Ashni Singh handing over a cash grant to a parent at Queen’s College on Tuesday (Ministry of Finance photo)

Noting that the restoration of the cash grant initiative is the fulfillment of a promise that it made, Minister Manickchand said what the government wants to do is ensure that parents are given a helping hand that will go towards the education and success of all Guyanese children.

While at Belle West Primary School, the minister took the time to explain the process that is used to come up with the final list of recipients, and that it is being audited by officers attached to the Audit Office of Guyana, so as to ensure that the distribution is done in its intended way.

Minister Manickchand also thanked educators who dedicated time during their July-August break to work with their respective schools to ensure that parents received their grants.

On Tuesday, the first day of the cash grant distribution, the minister also visited several other schools, including the Endeavour and the Commons Secondary School, Rama Krishna Primary School, Mae’s Schools, J.E. Burnham Primary School and the Turkeyen Nursery School to oversee the exercise.

BEST TIME TO BE YOUNG
Over at Queens College, Senior Minister in the Office of the President with Responsibility for Finance Dr. Ashni Singh said that young persons in the country have vast opportunities as the country is currently ongoing remarkable transformation.

Dr. Singh stressed that the government is committed to ensuring the creation of necessary conditions for the future of Guyana and Guyanese to have access to quality education.
He said that the disbursement of the cash grant will assist in ensuring that the critical needs of learners are met, especially where the purchase of school supplies and uniforms is concerned.

Last year, the government disbursed some $3.3 billion in cash grants to public school learners across the country. It was later extended to private schools, and at the time, the parents of each child received $19,000.
Minister Singh told QC students: “You are the future of Guyana; your successes will determine the success of our country. You are literally the Guyana of tomorrow; I encourage you to do all you possibly can to ensure that future is as bright as it could possibly be. We, your government, will play our part to all we can to ensure the realisation of this bright future. This cash grant represents one part of our commitment to ensuring you realise that vast potential.”

He added that the government intends to keep its commitment to moving the ‘Because We Care’ cash grant to $50,000 by the end of its current term in office.
Meanwhile, several ministers fanned out across the country as the distribution officially began on Tuesday.

For Kuru Kururu Schools, some $52.8 million was distributed to learners attending the nursery, primary, and primary top institutions. Present at that exercise was the Minister within the Office of the Prime Minister, Mr. Kwame McCoy, who said that the government will continue to work hard for the development of the country and for children’s education.

In Region Eight (Potaro- Siparuni), some $135 million was distributed as Minister of Amerindian Affairs Pauline Sukhai oversaw the distribution at Mahdia.
Over $313 million is expected to be disbursed in Region Five (Mahaica-Berbice), and will see over 10,000 students benefitting from the initiative.