The European Union (EU) on Monday launched its armband reflector initiative aimed at keeping pedestrians, specifically schoolchildren, and cyclists safe while using the roadways, especially in the evenings.

In her address, Education Minister Priya Manickchand related that poor road safety and improper usage of the roadways did not go well with the country’s development which will see a number of new roads being constructed while others are being expanded.
“Poor road usage is not compatible with expanding roads, smoother roads, and more roads. 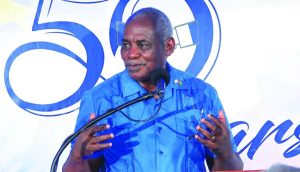 “We cannot speak of a modern Guyana with first-class infrastructure and high rises and a first-class education sector and health system and not look internally at ourselves, at our families, at our communities to see what it is we need to do to bring ourselves into this place that is developed and first-class,” the Minister highlighted.
She further stated that a number of persons were calling on the Ministry to teach children about road safety – something which could be taught at home. 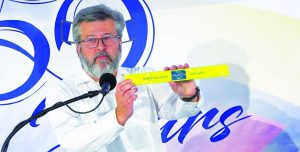 “I see persons calling on the Ministry of Education and the school system to teach all kinds of things and if we were to listen to them, we would have absolutely no room left for academics,” she said.
As such, the Minister encouraged parents to teach their children about road safety. She further lauded the EU initiative which would see 17,000 armband reflectors being distributed throughout schools in the various regions and urged persons to comply with laws related to road usage.
Once worn, the flexible neon yellow reflectors will make road users more visible on the roadways, especially at night.

The launch of the Armband Reflector Initiative at Kitty Roundabout

Further relating to the initiative was EU Ambassador, Dr Fernando Ponz Cantó related that hundreds of children in Europe lose their lives in road accidents and as such, they were attempting to reduce this not only there, but in other countries such as Guyana.
“The delivery of 17,000 reflectors, which will help to improve the safety of the citizens of Guyana on the road and more particularly the children of Guyana and the young people of Guyana especially when they walk by night.
“We estimate that in Europe each year 700 children lose their lives on the roads and many more are injured and in some European countries, these kinds of reflectors are obligatory for children who have to walk at night,” he explained.
Meanwhile, Home Affairs Minister Robeson Benn also made calls for proper road safety and road use, specifically among young drivers who are particularly reckless.
Benn also lauded the initiative, which would assist in the Guyana Police Force’s efforts to keep road fatalities below 100 each year, which was achieved for the first time in 16 years back in 2021.
“In 2021, we reduce road deaths for the first time in 16 years below 100 road deaths.
“Our feeling, of course, and worry was that it was more nuanced by COVID by the fact that we were locked in, the fact that there were less cars on the road, the fact there perhaps were less travel miles,” he said.
“But our anxiety has been heightened recently because while we’ve been suggesting that the morbid number of persons dying on the road per month should only be seven persons, we are at the moment going beyond that number and so our Guyana Police Force has to work as they are working harder to achieve numbers below 100 road deaths per year and also to reduce the number of incidents relating to injuries, hospitalisation, loss of work and all the trauma which relates to the question of death on our roads,” the Minister further explained.