Students of the Patentia Secondary school benefited from a comprehensive anti-drug awareness campaign from regional education authorities, days after four schoolgirls of this school were hospitalised after allegedly consuming an illegal drug.

The campaign also focused on gang violence, a press release from the Ministry of Education stated.

The awareness campaign included a forum held at the school titled “Know Yuh Worth – Drugs Can Hurt. Take Yuh Stand and Come Out De Gang”.

Students of the school also participated in a poster competition depicting messages against gang violence and the use and abuse of drugs. 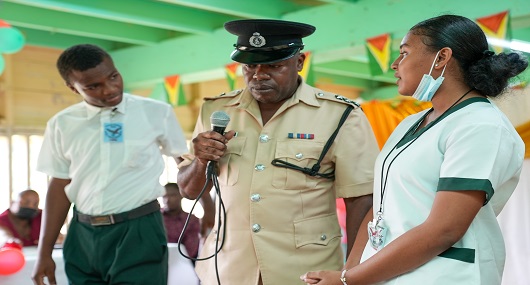 Chief Inspector attached to the Wales Police Station, Christopher Humphrey told the student population about the dangers of being members of gangs (Photo: Ministry of Education/May 19, 2022)

During the morning segment, it was related that the Chief Inspector attached to the Wales Police Station, Christopher Humphrey told the student population about the dangers of being members of gangs and being involved in gang-related activity.

During his presentation Inspector Humphrey also touched on domestic violence within the home. He told the students about the various forms of abuse and how to identify them. And he urged them to seek help as soon as possible if ever they are victims or if it occurs within their home.

Humphrey also shared stories of his experiences over the years in the Force to emphasise that being involved in illegal activity is not worthwhile.

In the afternoon, it was noted that Dionne Browne, a representative of the Education Ministry’s Health and Family Life Education (HFLE) Unit, Health, spoke to the pupils about gateway drugs such as cigarettes and alcohol.

She was accompanied by Officers attached to the Customs Anti-Narcotics Unit (CANU) who spoke to the children about illegal drugs and how the use and trafficking of these drugs are treated under the law.

Students were shown samples of how these drugs are now being packaged and sold. This was done so that the students can easily identify them to avoid using or being in the same space where such items are present.

The press release noted that the campaign was well received by the students as it was very interactive with many sharing their knowledge and asking questions seeking clarity on what they might have heard about the various types of gateway and illegal drugs.