Students of Region Seven (Cuyuni-Mazaruni) who excelled at the recent National Grade Six Assessment (NGSA) were on Tuesday, recognised for their achievements.

Six of the 10 top students were also presented with electronic tablets by Minister of Parliamentary Affairs and Governance, Gail Teixeira, MP, during a simple ceremony at the Bartica Secondary School.

Sabastian Khan of Potaro Primary School topped the Region with 495 marks and secured a spot at the St. Joseph High School in Georgetown. This is the first time that primary school was able to secure the top spot in the Cuyuni-Mazaruni region. 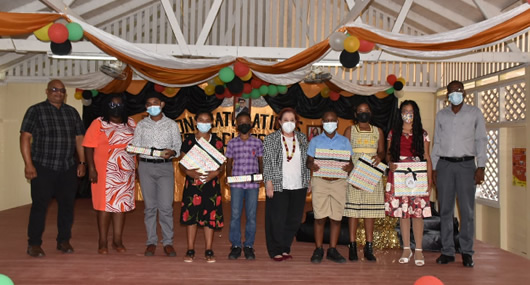 In her address, Minister Teixeira noted the importance of celebrating the students who wrote the examination in very difficult circumstances.

Minister Teixeira, who is also the geographical representative of the region, said there has been a paradigm shift in the delivery of education across Guyana.

This is seen as a large number of the high flyers in Region Seven came from schools in the most remote areas in the Upper Mazaruni, including Kako, Paruima and Waramadong.

“This is an important indicator. We have to strive as a nation to have equal access to education, that a child in Isseneru, Imbamadai must have access to the same standard that is offered to a child in Bartica or in Georgetown,” Minister Teixeira emphasised. 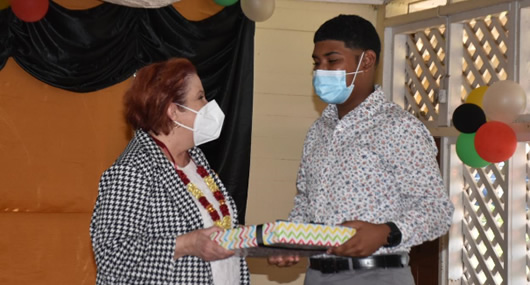 The minister acknowledged the efforts of teachers, families and the education department which played a critical role in the process. This, was made possible through support from Central Government through many initiatives including the expansion and upgrading of the Guyana Learning Channel, and ensuring the students have access to work sheets and other materials.

She said teachers are also being trained to be placed at schools in those remote areas. To this end, this year, the intake at the Cyril Potter College of Education (CPCE) has doubled.

The intention, she said is also to build a corps of young professionals in the hinterland regions, who are well trained to move their communities and by extension the country forward.

Top student, Sabastian Khan credited his achievement to his hard work and dedication and the support he received from his family and teachers.

Despite the many challenges due to the pandemic, he persevered and is elated to have copped the top spot in the region. He said, “I never dreamed of being the top 10 student.” Khan encouraged his peers to continue to work hard to reach their fullest potential.

The remining four top students will be celebrated at a subsequent event expected to be held in the Upper Mazaruni. They are, Kimora Edwards of Kamarang Primary, 484; Priya Edwards of Kako Primary, 483; Sabrina Albert, Paruima Primary, 481 marks; and Elesha Joe of Waramadong Primary with 473.

A total of 536 students wrote the NGSA examination in Region Seven. A large number of these students have been placed at ‘A’ list schools within the region.