-children urged to be advocates for change

Chief Education Officer (CEO) at the Ministry of Education, Dr. Marcel Hutson said that children are now more aware of climate change following a recent art competition. The CEO was at the time delivering remarks at a ceremony to award the winners of the competition. 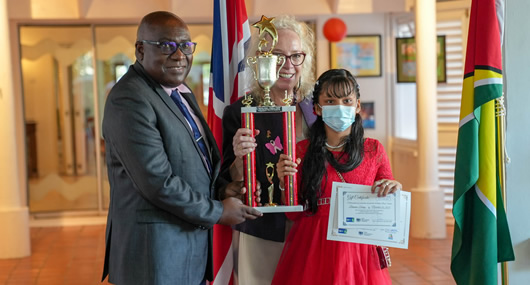 The COP26 Child Art Competition was a collaborative effort between the Education Ministry and the British High Commission. The competition was held under the theme “The environment and the impact of climate change.”

Dr. Hutson in his address said, “the whole notion of establishing collaboration between people of the United Kingdom and the Cooperative Republic of Guyana, in relation to issues of the environment, I think we are now closer in terms of fulfilling this particular objective and the objective we could see has trickled to the children who are the next generation because you ought to be familiar with what is expected if we are going to preserve the environment.

Therefore, I am so happy that you were exposed at a tender age as to how we should conduct and behave if we are going to stem the tide or the effects of climate change.”

He said the paintings on display indicated that they understand what climate is and how it affects the world. The CEO said that it was commendable that children from throughout the country especially Region Eight participated in the competition.

British High Commissioner to Guyana H.E Jane Miller said she was impressed with the quality of work and thought that was placed into their product. The High Commissioner spoke of the COP26 conference and how important it is to addressing climate change.

The conference is scheduled to run from October 31 to November 12.

The High Commissioner urged the children to be advocates for change. “In other words, I want all of you to go back and be agents of change. Tell your friends, tell your families, tell everybody you know how important it is for all of us to protect our countries, that we all become agents of change,” she stated.

The competition catered for the five to seven, eight to ten and 11 to 15 age groups.

At the ceremony, there was also a simple tree planting exercise aimed at fighting the effects of climate change.