Today, the Minister of Education Priya Manickchand, Minister of Local Government and Regional Development Nigal Dharamlall and Minister of Natural Resources Vickram Bharrat turned the sod signifying the beginning of the construction of a new Abrams Zuil Secondary School in Region Two.

Minister Manickchand said that over the last five years the school had reached a state where it required heavy maintenance work but nothing was done causing more than 500 children to suffer. She said the new school is a multi-year project and is scheduled to be completed next year at a cost of $585M.

The Education Minister said that she is looking forward to the new building and explained that for the current students the Ministry is exploring several options to have them accommodated at other locations.

Also, Minister Manickchand said that it will soon be something of the past that there are no schools in the Region that offer the Caribbean Advanced Proficiency Examination (CAPE).

She said that there are a few regions that do not offer CAPE and that the Ministry is working to sensibly and effectively offer the programme in those regions. However, Minister Manickchand noted that this must be introduced sensibly by ensuring the regions have all the facilities and teachers necessary to offer CAPE to students. 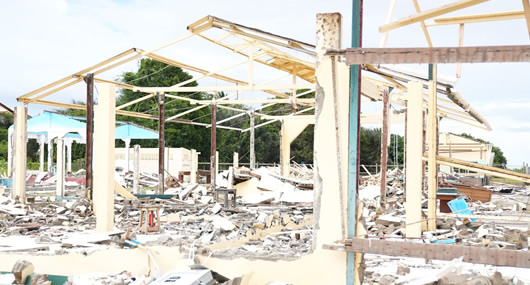 Minister of Local Government and Regional Development Nigel Dharamlall through whose Ministry the new school is being facilitated said that the new building will be a modern school and is a significant investment in the economy of Region Two. He said that the school will cater for 800 students. He said that the contract for the construction of the school was signed a few weeks ago and that his Ministry intends to strictly hold the contracting firm to the contractual timelines. The contract was awarded to Builders Hardware and General Supplies.